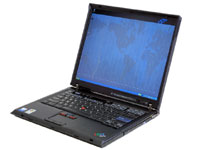 I recently got myself some Black Gold. I want to write all about it. Here is the story of how I fell in love with my notebook…

When you buy a ThinkPad you don’t buy a laptop, you are instead presented with an elegant invitation to join a community of mobile computing excellence, allowing you to be a part of a cutting edge technology ownership experience that only the high quality standards of IBM can deliver. The ThinkPad has a very interesting history - from how it was named to how the TrackPoint was called Magenta in color (even though it is clearly red). IBM Personal Computing Division embodies strict Quality control standards. One such IBM standard stated that the only thing that could be red on a product was an emergency power switch. Another story - IBM used to hand out pads to employees so they could jot down to-do lists. The pad, which was designed to fit into a dress-shirt pocket, was bound in leather and embossed in gold with the IBM motto, "Think." Wainwright, a senior planner at IBM Corp said, "Let's call it the ThinkPad.”. The IBM corporate naming committee objected to it since they felt the name would not translate into other languages. However it turned out, that they did not have to translate it anyway. How do you say ThinkPad in Japanese? Simple. Just “ThinkPad”.

One of the few people who realized this fact was Cannavino, president of IBM's Entry Systems Division. He knew competitors in Japan would share more technical information among themselves than counterparts in the U.S. IBM moved the initial ThinkPad Design and Production operations to the IBM design center in Yamato, Japan. The initial design of the ThinkPad was inspired by the shoukadou bentou, the traditional, black-lacquered, Japanese lunch box.

If you are fascinated by all the stories that have created such an illustrious ThinkPad history, let me point you to the source of these tales. A must read for any ThinkPad fan.

What makes ThinkPad(T & X Series) so different from its competition? Lets look under the hood of the Magnesium Carbon Fiber Reinforced Plastic frame of a T series.

It’s built like a tank. If you read a review of any ThinkPad, one thing you are sure to notice is how it is built for durability. For example the lid is attached to the base with two large metal hinges so that in the long run it doesn’t loosen up. There is an outer frame around the LCD which protects you screen from any material sneaking in when you throw your laptop into your carrying case. The truth is that every component in a ThinkPad is built to last, from the hard disk with active protection system to only water resistant keyboard in mobile computing.

The best part is that even in the Mac world it’s believed that IBM ThinkPad is better than the PowerBooks. It is no surprise that NASA has selected the ThinkPad to be on the International Space Station. NASA selected the ThinkPad after a 'torture drop test', 'bake and freeze environment test’ and the 'torture spill test'. If you have followed the previous link, you would know that the ThinkPad even withstood the infamous Himalayan challenge.

Preventive failure in mobile computing has arrived. The active protection system consistently monitors the movement of the laptop with an accelerometer and parks the Hard disk within 500 milliseconds, if it detects a potential fall or any movement which can deliver a damaging shock to the hard disk. Now that is what you call the “coolness factor”. [Whitepaper]. Further to this, the hard drive is also equipped with Air Bags (the technology you find in automobiles) and a shock absorber (acts like a bumper in your vehicle) to reduce the amount of shock passed on to the drive.

The latest ThinkPads are equipped with 7200 RPM hard drives from Hitachi, which recently acquired the hard drive operations from IBM. Hitachi developed a new component called “femto” for the hard drives that supports the read/write head above the surface of the disk. This reduces the power consumption, and increases performance. [source]

This is one area where competing vendors are eating IBM dust. IBM has managed to fit in a full size keyboard, yes ladies and gentlemen, you read correctly…a FULL SIZE keyboard. You can’t find any review about a ThinkPad that does not praise the beauty of the ThinkPad keyboard. The keyboard conforms to the ISO 9204 Spec. Here are some extracts from the spec,

“Actuation of a key shall be accompanied by feedback. Feedback can be kinaesthetic, auditory or some combination of them. If the design allows only one method, then kinaesthetic feedback is preferred”

"The visible surfaces of the keytops shall be matt finish."

The Keyboard is so unbelievable. Once you get used to it, you can’t possibly use another keyboard. There are people out there who are ripping of old ThinkPad keyboards and finding some way to fix them to their personal computers. They simply cannot live without it. I understand completely.

I have disabled the Touch Pad on my ThinkPad. I don’t think I will ever use any other pointing device other than my beloved TrackPoint. TrackPoint history is as long as ThinkPad itself. The man behind this invention is Ted Selker. He fought hard to get his invention to market within IBM. The stories about the TrackPoint are very interesting. For example, the initial design of the TrackPoint was black. Since it got lost in the black keyboard they decided to make it Red. However IBM standards dictated that nothing can be red in a machine except the emergency power switch. So the team decided to call it Magenta instead of red. Ingenious. This is a story to prove that the passion in people is as important as the technology in machine itself.

The ThinkLight is a LED placed at the top edge of the display which can shed some light onto your keyboard in low light condition, making it easier to type. “So what” you say? Well, apparently for some co-operations the ThinkLight has been the key deciding factor when selecting a ThinkPad over other notebook brands. One such company is Lufthansa which selected the ThinkPad over other notebooks because the ThinkLight made pilots lives so much more easier in the low light conditions of an aircraft cockpit. Once again the “coolness factor”. Will this pleasure ever end?

There are dual antennas placed on both sides of the display for optimal signal reception. This link provides more information than what I could write here.

This is another research spanning out from the IBM labs. I have scene some Siemens LifeBooks back at office that make more noise and get hotter than a used car. ThinkPad does not worry you with any of those problems. It uses Thermal Hinge technology to keep your notebook cool.

This topic deserves a blog on its own. The Embedded Security Subsystem became so cool with the introduction of the Finger Print Scanner on the ThinkPad. The main problem enterprises faces is getting people to use good passwords and getting them to change and maintain their personal security regularly. The ThinkPad re-writes the security paradigm with the introduction of the breakthrough Finger Print scanner. You could argue that finger print scanner is not something new to the notebooks and Samsung X10 Plus already has a finger print scanner. However those are touch scanners rather than a swipe scanner. IBM introduced the swipe scanner which solved many problems found in a touch scanner. One of the problems the swipe scanner solves is that the user now has to drag their fingertip across the scanner, and therefore there is no way to "lift" a fingerprint from the surface. Pragmatic HCI excellence at its best. Here is a full review of the IBM fingerprint scanner.

This is more suitable if you want to deploy a ThinkPad across your enterprise. In such cases the purchase cost of any notebook accounts only to 20% of the TCO. IBM has developed a set of technologies called ThinkVantage which address the other 80%. If you are a small company here is a classic case study as to how a ThinkPad deployment can increase productivity and help you to build an office where people just love to come to work each day.

If you think this is it, don’t worry. IBM is already tossing around some breakthrough ideas for the future of ThinkPad. Get ready to be amazed.

IBM reached its 10 millionth ThinkPad customer in the year 2000. In 2003 they reached the 20 million mark. 100% growth in 3 years. Obviously all this history and a continuous passion of excellence have paid dividends. I am proud to be a part of this group. The ThinkPad belongs in a new realm of prestige and is a class of mobile computing all on its own, to be compared with no other and revered by all. Like a BMW, a bottle of fine wine or a Villa in Italy, the only way to appreciate the ThinkPad is to drive it…taste it… and live it. Enjoy.