Some of the links to my friend's blogs were broken, but I was not able to update them because blogger had this bug when it comes to balk update of blogs. Finally I have done it. I also have added few more links which have become my favorite blogs.

On a different note I would like to point you to a blog entry I read about, “Work Relationships Matter” and it’s sad that people get treated this way in some companies. These are companies treating their employees like slaves and trying to squeeze maximum out of them while paying lower remuneration. They even capitalize on the poor economic condition especially when the job market is really down to recruit cheap labor not offering fair wages.

EA: The Human Story: is something that most of you would have read it (because it was one of the heavily linked post in the blog and media world). In case you have not, it’s an interesting read and a proof to that fact that even in IT industry companies like these exist.

Junior, one of the directors at BlueSky, took us out on a small tour around the west side of the island. He has been very helpful as far as work is concerned, and helping us understand Samoan traditions. Junior, among many things, is man with lot of respect in the community, a person who can make things happen, a talking chief, a veteran telecom switch engineer and a person with sense of humor who can make people around feel at home. Here are some pictures I captured when during our small tour. 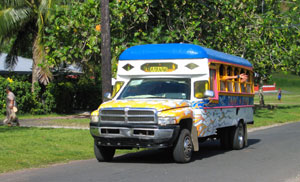 The Aiga (pronounced Ainga) bus is the main public transport available in American Samoa and most of these buses are owned by private owners. These are trucks/4WDs converted into buses by local people and most of them have a full blown stereo system onboard. When you reach your stop, simply knock on the window to signal the driver to stop. 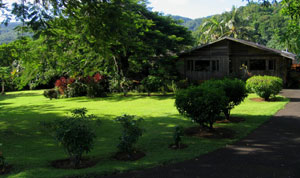 Now if you ask me why I would love to live in Samoa, here is a picture that can answer your question. Everywhere its greenery and it is maintained as it should be. I am sure some of you are going to drool over this picture :-) 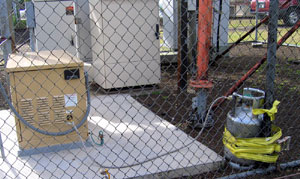 This is something new to me, a generator powered by a gas cylinder. Since this cell site is on top the mountain where electricity is not available, a gas cylinder powered Generator has been deployed to power the cell station. 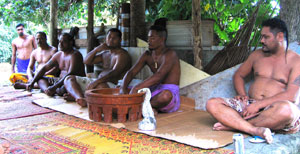 Junior organized a Kava ceremony for us so that we could experience some local traditions. Kava is a local drink which is squeezed out of a Kava plant root and then filtered. Samoans are very proud of their local traditions and they strive hard to protect it. We were offered a local food which is made out of Taro root, coconut milk and some sugar. Thanks to Junior for organizing this event for us, we really appreciate it. 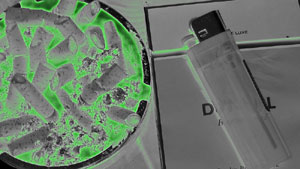 You know what this is. Found an interesting shot and then photoshopped the outcome.

I was doing a protocol implementation and I had to use CRC16 checksum as part of the packet. Looks like CRC 16 has been removed from Java 1.0.2 onwards, so I had to spend little more time on search on Java CRC implementations. I was also under the impression that’s its really difficult to implement my own CRC implementation, at least until I read "A PAINLESS GUIDE TO CRC ERROR DETECTION ALGORITHMS". If you have just heard about checksums and CRC, it’s worth a read. I don’t think any other document explains CRC as detail and simple as this one.

Also here is a Hexadecimal class, which I found useful, if you are dealing with Hex a lot, I am sure this might be handy

An effort to capture shallow depth of field on a digital camera. 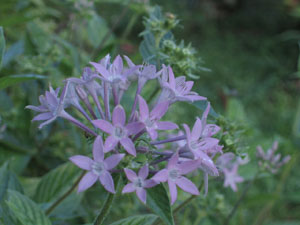 My shadow, behind a tree. I would liked it to be bit more shaper. Will try again may be tomorrow 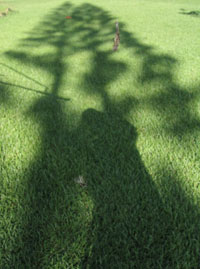 It was all last minute. Got the Australian Transit Visa at 4 PM and then I knew that I was going to leave less than 24 hours later. It’s the longest trip I have ever had!

A Phone Booth from Australian Airport

The trip spanned Colombo, Singapore, Sydney, Tonga, Apia (Western Samoa), and finally American Samoa. The total hrs traveled was 44 hrs with 4 transits. The Australian Quarantine Officer was very helpful. One of the Onion Fry bottles I had taken from Sri Lanka had opened inside the bag and the oil was all over. He helped me to clean up the stuff, gave me a new bag to wrap my stuff in. I was honestly surprised since I have never experienced such hospitality from a quarantine officer before! 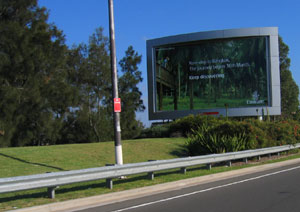 Bill Board in Australia, captured while on our way to hotel to catch some sleep.

On the Sydney to Apia (Western Samoa) flight, my friend pointed out to me how beautiful one of the airhostess was, and suggested we take a picture of her. Since there was no way I could click a picture in that light condition without a flash, I thought I might as well ask her. We eventually found out that she was Miss. Tonga (another pacific island)! 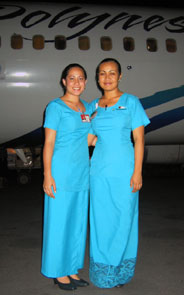 One in the left is Miss. Tonga

When we reached Western Samoa, I was a dead man…I was too sleepy, and I slept on the floor. However, the morning flight from Western Samoa to American Samoa turned out to be a beautiful site seeing trip. We flew on a 16 seat tiny air plane and the altitude was so low we could see everything…all the beaches, mountains, water falls…the list is endless. 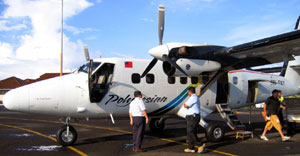 When we reached American Samoa, we were picked up by Arlene. Once we settled down for breakfast with her, it was all a blast. It was nice to have so many laughs and I thoroughly enjoyed the conversation more than the food. Back at home when my colleague mentioned that Samoa is better than FSM in hospitality and friendliness, I refused to believe it. However, now I am beginning to believe it! The long and tiring trip is turning out to be totally worth it!

The view from our house here in American Samoa is beautiful. As soon as I arrived here I wanted to take some pictures but I thought I would wait till morning so the sun light is not harsh. 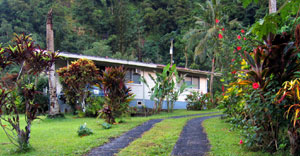 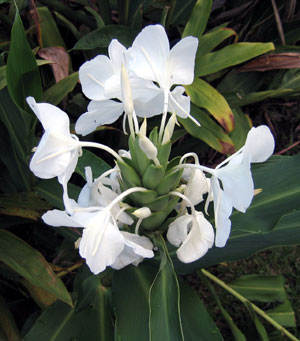 The garden around the house. 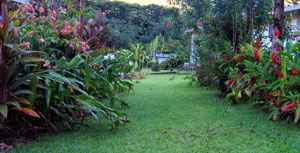 Other side of Sri Lanka? Or is it? 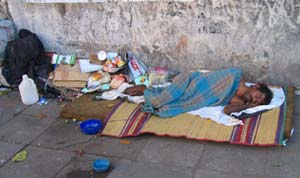 I just ran into this question today to determine the output of this Java Program.

The question followed with asking about Dynamic and Static binding. I think I went though some cross connection in my brain. I have known about these binding, however instead of hooking them up with overloading and overriding, I had hooked them with Constructors and Methods.

I remembered there are instances where static binding is used and there are instances where dynamic bindings are used. Reference type is used(at compile time) to determine which overloaded methods are invoked and instance types (at runtime) are used to determine which methods invoked when methods are overridden. However I completely missed the wicket since the question had a constructor part, and the brain neurons miss fired and some connections were erased and some instant new once were created. These misconnections forced me to a conclusion that with methods, instance type is used and with Constructors reference type is used. It’s funny how our brain works at times?