Something for Project Managers to think

...I've been through several such projects where all the pressure was put on the programmers to bring the project to completion...

...Don't take the cowardly path - "I pushed the team as hard as I could, literally 24x7, what else could I do?" Unfortunately, many programmers-turned-managers really don't know any other way - this is what their managers did when projects got into trouble, so they do the same.

It's unlikely you've heard of him, this quiet man from Essex, but you probably own one of the gadgets that he's designed. He transformed the image of the computer and, if you're really lucky, you might get one of his latest must-haves this Christmas [Source]

And here is my favorite piece

Apple made a decision based on style, in fact, iPod is full of decisions that are based on style. And style is not something that 100 programmers at Microsoft or 200 industrial designers at the inaptly-named Creative are going to be able to achieve, because they don't have Jonathan Ive, and there aren't a heck of a lot of Jonathan Ives floating around. [Source]

War of the Techs

The cold war between these two companies is no secret to anyone and has been building up momentum for a while now. The article titled “Gates Vs Google” puts the whole drama into perspective, and gives an idea of how fierce and bitter the competition has evolved into. The recent switch of Microsoft’s Interactive Services Division Corporate Vice President Kai Fu-Lee to Google has taken the battle to higher portals in recent times.

The battle was triggered by Sun’s COO, Jonathan through his entries like this one. In return HP’s Linux Vice-President, Martin Fink played the key role on HP’s behalf but couldn’t sustain for long. To follow were the famous open letters by HP and a letter in response by Sun, stating Sun affirmatively stands by their claims regarding HP/UX.

The heat had subsided for a while and things seemed pretty calm. However before too long there are clear signs of the battle erupting once again and this time with HP’s announcement of the laying off 14,000 employees including a significant cut of R & D personnel. Sun has been quick to respond by giving an open invitation , “We are hiring!”.

This battle gained momentum when AMD publicly accused Intel of unethical business practices and filed a law suit case against Intel. As customary, Intel is dening the accusations but what kindles my curiosity most is why Dell vehemently resists to go with AMD, probably the implications are best left unsaid!

AMD files antitrust charges vs. Intel
AMD vs Intel spills over into Japan

Anybody wants my Camera?

I am planning to buy a Nikon D70s Digital SLR but before that can happen I have to sell my Canon S50 Digital Camera. I bought it in Singapore for 800 SGD, but when I am selling I am going to throw in an extra battery and also the camera cover which I bought separately, probably a 100 SGD value. Make me an offer and if it is reasonable we will have a deal. You can see the pictures I have posted in this blog as samples of what it can produce. You can check out "Beauty of Palau" which is one of my favorite.

Tipping Point is turning out to be an interesting read. It talks about Connectors, Mavens and Salespeople. I have actually known a few connectors and mavens and it’s just that, after reading the books now I can understand what an important role they play in our society.

In the past few weeks, work has been pretty hectic. It is not a complaint as such, but rather, a statement. However, lately I’ve been thinking about this vicious cycle. For the cycle to be true, the following two equations should hold true.

When your work is less and not challenging enough, you have more free time. However, since you make less money, you don’t have enough money to spend during that free time you have and make it fun. On the other hand, if your work is full of challenges and there is more and more work everyday, you eventually have less free time. Now, you have the money to spend and have fun, BUT you have to fight for time.

Now which is better? Less work and less money or more work and more money? Obviously the best solution would be as my friend always says, “to earn an honest weeks salary for an honest days work”! Until then, answering this above question has become crucial to my survival. Unfortunately, I am still searching for an answer.

If any of you have got caught to this trap, leave me a comment. I will have the comfort of knowing that I am not the only one out here searching for an answer!
posted by 88Pro / Saturday, July 16, 2005 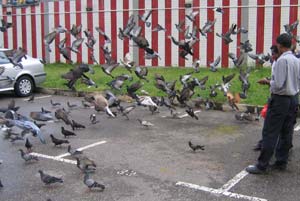 Most of you must be wondering why I have not been updating this blog frequently, however as mush as I would like to, free time has become a luxury. We went for a multi-language implementation (i18n), of our product and were facing a funny problem and pressure from customer was increasing.

A value (Folder name in Chinese) is being passed from the back end database to WAP browser and when the user clicks on the value its being passed back to the application layer and compared against the one which is being retrieved from database. The result NO MATCH. WTF??? It was retrieved from the DB, sent to the front it, passed back and compared with the value in the DB again and a no match?!!!

I tried everything by the book, made the char set UTF-8, used the URLEncoder, got the bytes of the string and created a new string with UTF-8 encoding, specified the WAP header as UTF-8, whatever you did, the value displayed and the value passed back to Struts Action class are two different strings.

After trying every possibility to figure out the root cause, still not being able to locate, I solved the problem with a dirty little trick. Looked at the watch, 6 AM in the morning. You got to appreciate when you are under pressure and “can’t” and “no” are not possible answers you can give, you mind comes with cleaver tricks to solve the problem, if you think hard enough that is.

If you have any suggestion, please share with me to solve this i18n issue.

On a different note, we went on a company trip to Kandy. It was fun, I enjoyed every bit of it and was feeling good to have a relaxed weekend. We visited Pinnawalle, the elephant orphanage and that mean you get to see a picture. 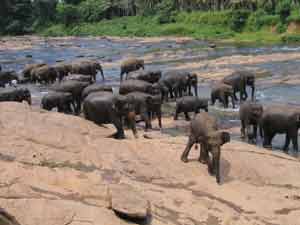 I manage to read halfway through “ThinkPad, A Different Shade of Blue” and the making of ThinkPad history is amazing. One part of the history talks about why the colour black was chosen for ThinkPad when everyone was making computer equipment in pearl white. Pearl white was the color of choice for desktops because they want to them to blend in with the other office equipments. However, when they made ThinkPad, they wanted it to stand out and have a personality, what was the colour of choice, Black.

I hear next wave of ThinkPads will have a two tone colour and that will be a major departure from an IBM legacy and the first big change under the Levono administration.