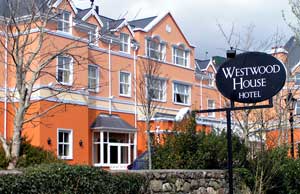 We had a long weekend coming so it was decided that we would visit west coast of Ireland which has lot of historical structures. Our first visit was to Kylemore Abbey Castel. I don’t want to describe the beauty of it, but rather leave these pictures to tell the story for you. 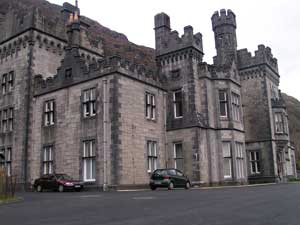 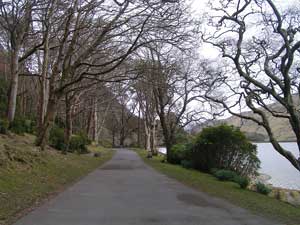 The pathway leading to the Castle - By R 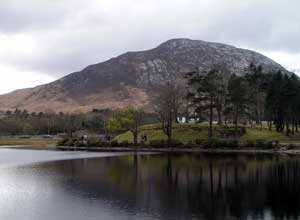 The lake in front of the castle - By R

Our next stop was Kinvara where we booked a hostel for the night stay. Once we settled down at the hostel, the sun was still up at 7 pm, so we decided to go around and check out the small harbor at Kinvara, and Dún Guaire castle. The county is full of greenery, when you see houses painted in striking colors which glows in the evening sun light, you can’t resist but capture that frame. 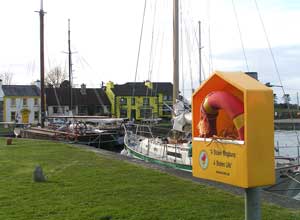 Next day morning we set out to see the Aillwee Cave, at Burren which is a historical city of Ireland. The cave tour would have been boring if not for the tour guide accompanied us. It has a under ground river flowing and a small water fall. What you see in the picture below are called stalactite which takes about 100 years to grow just 1 centimeter. 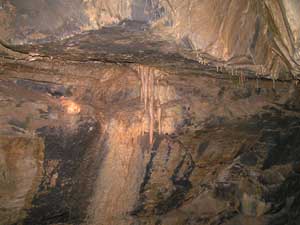 Stalactite formation inside the cave - By R

While we were at the mountain we were able to capture the greenery of Ireland too. If you have never visited Ireland before, just in your mind replicate this picture million times, place thousands of sheeps and that’s how the entire Ireland looks like, green everywhere. 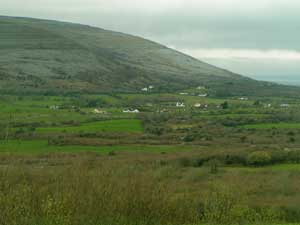 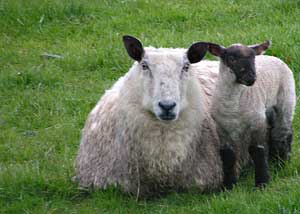 Our next stop at Burren was Newton castle which is actually a fully equipped Art School. Imagine studying art at a class room inside castle. One of the students at the college was nice enough to open the castle door for us, and when you go to the roof top the view is breath taking. 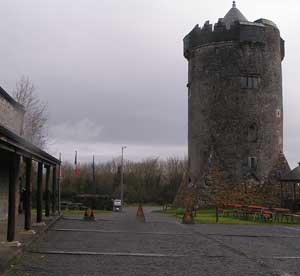 Even the seating arranged outside of the Burren College of Arts, looked artistic. 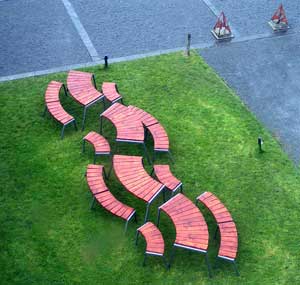 On our way to city of Limerick we saw this beautiful red house, I had to get off the car and take a picture. I wished there was a blue sky which would have enhanced this picture dramatically, but even without that, it looks stunning. 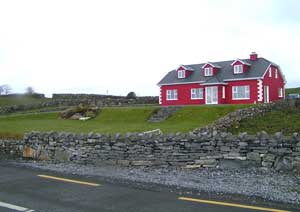 Once we arrived at Limerick for a short time we were lost for the first time and didn’t know which road we were, but one of the turns we took, led us to the King John’s castle, which was opened for public, for a fee. 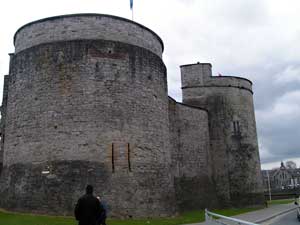 I have seen big houses built spending millions in Sri Lanka, but Ireland houses are small but have something about them, kind of feels like a, hmmm, home, you would want to have one for yourself. 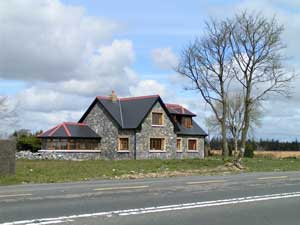 This weekend I went to meet my friend’s sister who lives in Foxrock. It was kind of adventurous in the sense I had to travel by buss for the first time in Ireland. I checked on the internet and figured that I got to take an 84 buss route and I can get a 84 from Dart Station. My colleagues dropped me at the station and I waited for about an hour for the buss to come and I must admit that it was freezing cold and my hands and face became almost numb. I really regretted not taking the gloves with me that day. At last the 84 came, I got on and tried to buy the ticket, and the driver told me that I had to take a 145 instead and 84 doesn’t go to Foxrock. Ok, that’s interesting I thought and then waited for a while to get a 145. In 15 minutes time 145 also came, got in, tried to get a ticket and again the driver told that the buss doesn’t go to Foxrock and I should probably go to the Main Street and get an 84 or a 145. Now I already tried an 84 and now I am in 145 and the buss driver is telling me to go to Main Street and again try 84 or 145. That didn’t make much sense to me until he told me that all the busses coming to Dart station are coming from Dublin and to go to Foxrock I actually need to get in a buss that is going towards to Dublin.

Finally manage to find Main Street and got on to an 84 and SMSed my friend’s sister to come to the buss stand. Right when I saw her at the buss stand I didn’t notice that there is a bell you can ring for the buss driver to stop but instead I came down fast from the upper deck of the buss (Almost all are double Decker busses) and ended up getting down at the next buss stop and walking all the back.

Finally she was there and we were walking towards her house and it started raining and for the first time there were pieces of ice in the rain (I don’t know what you call that kind of rain though) hitting my face which was already numb and it was really painful and both of us started running towards the house. After almost 2 hours I have reached the final destination.

It was really nice to meet up with her, she had cooked fried rice, dhal, potato curry and some mixed vegetable curry and it was so good to eat a proper home cooked food after a long time. It was her birthday too on that day, so I handed over the gifts her parents sent from Sri Lanka. She seems really happy with her Phd, professor and colleagues at the Univercity. They are all planning to go to Hungary for a conference. She was really excited about the trip and very much looking forward for it.

Now I am heading back home in 145 after a delicious lunch and the Dart station came where I was suppose to get off and call my friend to come and pick me up. However I thought, the buss must be going close to my house so without getting off and calling my friend, I might as well give it a try to get home myself. I sat there in the buss hoping it would go close by a familiar landmark where I could get off and walk back home. Unfortunately no familiar land mark came my way and sooner I realized that I have almost gone to the area where my office is. I quickly got off and crossed the road, got a 145 again and went back to Main Street and called my friend, and reached home, safely.

Even though it was hectic traveling all around I guess I managed to go a round tour of country Dublin for few Euros. It was an experience.

Me signing off to bed now. Catch you with my next post.

I am at last in Ireland now. The trip was really hectic, especially the segment from Colombo to Paris, 11 hour marathon. I guess even though I have been around a lot, I have never been on a very long flight like this. The head was feeling heavy and was having a headache.

However the good news is that the Sri Lankan Airline service was excellent this time. People were really polite; especially the airhostess named Mrs. Yamuna. It was so good that I had to fill out a customer comments form with all sort of positive comments and hand it over. I have had some really bad experience with Sri Lankan airlines and it’s nice to know there are people who set the bar really high when it comes serving the passengers.

One thing I really really miss after coming to Ireland is my camera. The country is so beautiful everywhere I look I see photo opportunities. I think I am going to pretty soon invest on a good camera before I come back to Sri Lanka.

The weather is really cold outside and can’t leave the house without a jacket. Since this is my first trip to a European country and cold weather. I guess it will take some time for me to settle down.