At last at Dublin

We have seen most parts of Ireland (not really) but never been to Dublin the capital of Ireland. Whenever someone from office asked why we have not been there yet, our excuse was, we have to go on a weekend when it’s not raining. Finally that weekend arrived and we were off to Dublin this weekend.

We took the Dart (train) to Dublin and that was my first experience in a Dart here in Ireland. The Dart is very similar to the MRT in Singapore. Fortunately I didn’t get lost this time since one of our hSenid colleagues knew his way around Dublin.

Lot of different instruments were being played on the road side, but I think what we most enjoyed was the puppet show. It was really amazing to see the amount of control he had with the strings. Just unbelievable. You just can’t believe that every movement was being controlled with set of strings. It was so smooth; I have never seen something like that before. 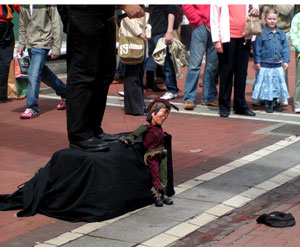 I checked www.youtube.com to see if I can find some clip which I can link to, so you guys can have a taste of what this guy was capable of and I actually did. Looks like yesterday someone has recorded a small clip and posted on YouTube.

Here is the clip. 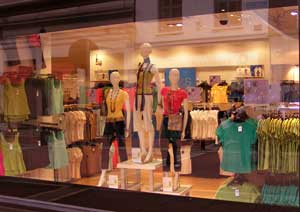 When I saw the colours, the green, red, yellow in an ambient lighting I knew I had to capture it. Nice shot right :-) 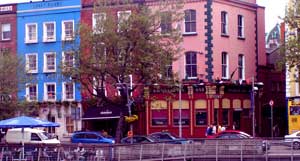 One other thing you would notice in Ireland is that, buildings are really colorful. What makes them more striking is that the adjacent buildings are of totally different colors. There was a yellow building next but somehow I have missed that off my frame. 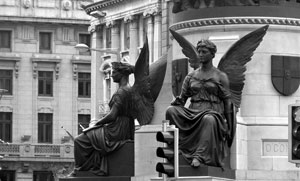 You see lot of these statues in various styles in and themes through out Dublin. 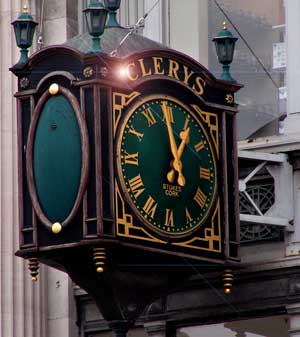 Smile in the Mind

After finishing The Da Vinci Code, I started reading Smile in the Mind, it’s a book about witty designs.

One example really caught my eyes. It's a FedEx logo, and it was given as an example for witty, clever logo design.